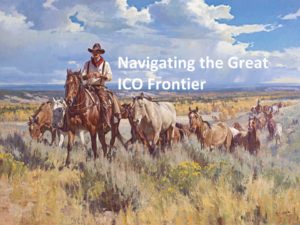 Similar to the settlement of the American West in the nineteenth century, a small group of pioneers, speculators and innovators have been staking claims and seizing territory on a new, global financial frontier – the ICO. The transformative technology underpinning this revolution represents one of the greatest innovations since the widespread adoption of the internet. Blockchain technology will fundamentally disrupt and transform how businesses and individuals transact.

There are two evolving macro trends. First, large corporations such as Goldman Sachs, Microsoft & IBM are investing in closed blockchain technology applications with the goal of increasing internal operational efficiency (by eliminating many jobs currently performed by humans). Specific examples would be the use of distributed ledger technology to perform functions such as clearing and settlement of cash securities as well as compliance (KYC & AML). Outside the financial sector, many other enterprise verticals will be impacted (real estate, insurance, energy & cloud storage, to name a few). Second, tech startups around the world are developing public blockchain applications which will disrupt everything from the way people bank to how they buy and sell goods and services. Many incumbent internet hub-and-spoke business models will be impacted as blockchain technology starts to disintermediate entire sectors.

Many investors looking at this space from a more traditional perspective have difficulty understanding how to gain exposure to this early-stage technology. ICO’s (initial coin offerings) have been a hot topic, both for investors and more recently regulators. An ICO allows an investor to gain potential upside through investing in a cryptocurrency or “token,” which after issue, trades on a cryptocurrency exchange. Many ICO’s have generated huge returns, which has drawn in legions of retail investors seeking alternatives to traditional equity investing. Because ICO’s and most of the exchanges where cryptocurrencies have been trading are largely unregulated, governments have begun to chime in, providing guidance and in some cases, taking legal enforcement actions. We are currently in an environment where the validity and scalability of blockchain technology is acknowledged by many, but where the nascent ICO investment infrastructure is being called into question.

How should tech investors look at ICO’s and cryptocurrency? Is this a passing fad that will be regulated out of existence or is it a nascent asset class that will offer early-stage investors an opportunity to gain exposure to the next Amazon?

To answer this question, it’s important to first define exactly what instrument an investor is buying when participating in an unregistered ICO. It’s not equity or a commodity and may or may not be a form of digital currency. The key issue is that an ICO usually gives no clearly defined rights or claims to an investor. Rather, the value of the tokens is based on the perceived value of a hypothetical future use case, which is generally defined in a “white paper” published by the issuer. Most ICO’s have no offering document and in many cases, it’s impossible to determine where an entity is domiciled or who the beneficial owners of the corporate entity raising the money are. That said, when an unregistered token begins trading on an unregulated exchange, the general hope is that the nominal token value will appreciate and that an investor can exit with a quick profit, provided there is sufficient token liquidity.

In the United States, the SEC has recently provided guidance, basically arguing that most tokens are indeed securities and should therefore be issued in accordance with existing regulations. This applies particularly to U.S.-domiciled issuers and to foreign issuers targeting U.S. investors. Based on this recent guidance, many U.S. entities looking to raise capital for blockchain technology businesses are issuing tokens as securities in an effort to comply with SEC guidance. An emerging trend is to issue a special class of preferred equity shares, which may best replicate the “spirit” of a token offering while also complying with regulatory guidance. Such an approach gives investors clearly defined rights as stipulated in the offering document. Once these “security tokens” are issued, it is also likely that they will eventually trade on an alternative trading system (ATS). The U.S. market, in our view, is likely to evolve into the largest regulated ICO market, once issuers adapt to the recent guidance and begin issuing tokens in a more uniform manner.

In a nutshell, the role of traditional Silicon Valley venture capital investors is being disrupted by ICO’s, which provide direct and democratized access to early-stage tech investments. The fact that regulators are providing guidance for issuers won’t stop this process of disintermediation. Instead, sensible regulation will create a more level playing field for investors and facilitate rapid growth of this nascent asset class.